Actually, I have broken with the lectionary readings this week. In other Christian traditions the 15th of August is a major festival, the Assumption of Mary. Whilst the whole panoply of Marian devotion and doctrine lies outside our spirituality and theology, it is possible to recognise that we do not pay Mary the attention she deserves. If we stick to the Sunday lectionary her story only appears twice in three years, on the Fourth Sunday in Advent in years B and C (The same Sunday in year A is reserved for the single occasion that Joseph’s story appears in the lectionary!). Mary speaking of herself declares: “Surely from now on all generations will call me blessed.” It is perhaps worth, now and again, reminding ourselves of that. With this in mind I thought we could borrow this Sunday to think a little about Mary. 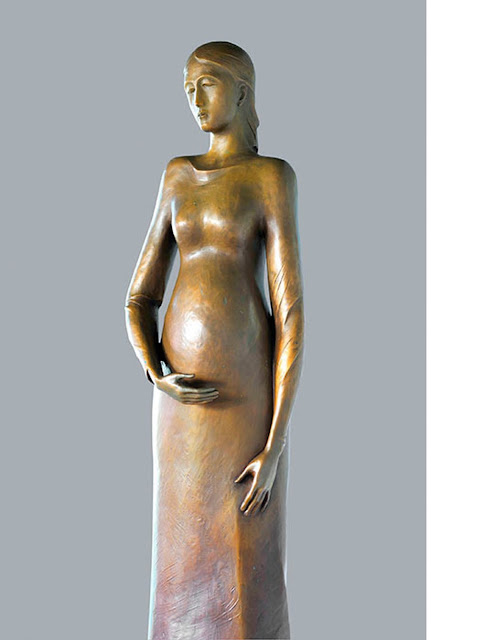 The angel Gabriel was sent to a town in Galilee called Nazareth to a virgin engaged to a man named Joseph, of the house of David. The virgin’s name was Mary.

Mary’s story, or at least the part of her story that we hear, and that remains important to us, Mary’s story begins in something God does. He sends his messenger to her, with a request. The initiative is with God. As with all things in the relationship between humans and God, it is God who starts the ball rolling. In the birth of Jesus as with all things relating to God, it is about something that God begins. But the thing that hangs us up in this story is Mary’s status:

The angel Gabriel was sent. . . to a virgin

To us  and in the way we usually read this passage, that word “virgin” has a gynecological significance, and it has acquired a moral meaning. The word that is used, παρθενος (parthenos), as it happens doesn’t mean much more than “unmarried woman”. It is actually Mary’s response to Gabriel’s announcement that points us to what that means in her case:

“You will conceive in your womb and bear a son.”

Mary is surprised and confused. She knows how babies are conceived. And she knows that doesn’t apply to her:

Says Mary. The Bible intends to say one thing. But when we read it, we make it say something more, or something else. The doctrine of the virgin birth is not meant to be saying anything about human sexuality or, for good or ill, about marital relationships. And still less, it is not meant to be saying anything about how sin comes into human society, and how sin carries on from one generation of humans to the next. None of this is intended in Gabriel’s announcement to Mary. And yet that’s so often what we find ourselves bogged down in. That Jesus is conceived in this way is meant to emphasise one thing. That the initiative in the birth of Jesus, as with all things relating to the relationship between God and human beings, the initiative lies with God. The birth of Jesus is something which God intends to do. But, and this is decisive in the relationship between God and human beings, it requires Mary’s willing participation

Mary’s conclusion to this scene is her consent:

“Let it be with me according to your word.”

It is that consent which gives Mary her place of honour in the memory of Christians (some more than others). It is that consent which makes her the first and the model disciple. But often the nature of that response, and the content of Mary’s character is misunderstood. And as a consequence the character both of the relationship between God and humans and the nature of discipleship become distorted. Mary’s answer is too often interpreted as meek passivity. Mary young, vulnerable and female is overwhelmed by Gabriel the powerful, dominant masculine messenger of a male God. The scene is usually pictured with Gabriel standing – all light and wings,  standing over a bowed almost cowering Mary. Her yes becomes a cowering acquiescence before the irresistible fiat of a despotic God. The social and moral consequences of that picture have been catastrophic for women in general and female Christians in particular. This portrayal is heightened by the, possibly false, presumption that Mary is a teenage girl hardly more than a child.

But the way in which Mary is actually portrayed in the Bible gives a quite different picture of her womanhood. Mary is first of all portrayed as questioning and thoughtful. Faced with the angel and his surprising greeting:

An encounter with God’s word. Especially when delivered in such a dramatic way is likely to leave anyone confused. Indeed it will inevitably surprise and perplex us. But Mary thinks about what this might mean. Her final acceptance of what God is saying and doing comes after much thought. And she is not afraid to question what God is doing:

She demands an explanation of Gabriel as he speaks on behalf of God. And she is given one! And a little later she demonstrates she is a considerable thinker. She celebrates what God is doing with her in the Magnificat. Her faith seeking understanding finds voice in the song she sings. That song is the magnificent revolutionary manifesto of what God is about to accomplish. Hers is not a mindless acceptance. She is a thoughtful questioning participant in what God is doing. Mary is the model disciple. That portrayal of Mary gives a very different idea of discipleship than the one often suggested and even imposed, especially on women!

Furthermore as Mary’s story continues what we see her engaged in is not the limited roles that are usually assigned to women. Despite the Christmas carol’s picture of her as the lowly maiden in whose arms Jesus lay, that is not how the Bible pictures her. We never see her in a domestic situation. She is not pictured like Martha and the other Mary, or Peter’s mother in law, or even the woman at the well. All of them we see engaged in what might be called conventional female tasks. What we actually see Mary do is take risks  to see the fulfilment of God’s will for her. We see her make repeated risky journeys. First she goes to her relative Elizabeth in the hill country of Judea. Then she travels from Nazareth to Bethlehem with Joseph. And afterwards she journeys into Egypt and back again with Joseph and the infant Jesus. And finally she makes her way to the foot of the cross. But the first risk she takes is to say “yes” to God. The risk which Mary takes is a very considerable one. She risks the condemnation of her society. She risks even the violence of patriarchy against her. To be unmarried and pregnant in that society is a very risky position to place oneself in. At the heart of the relationship between God and humans is the opportunity to say “no”. God honours her autonomy. “No” would have been a valid answer. Her body is hers. It is her choice to allow it to become the means for God to accomplish what God intends. And in this relationship all the conventions of society and the morality that is imposed by the rulers and arbiters of that society is superseded. Mary answers without reference to anyone else. She does not require the permission of her father or her fiance to do what God is asking of her. Her consent is necessary. But her consent alone is sufficient

There is a picture of God in this story. Gabriel offers it when he declares the creed that lies behind all other creeds:

“For nothing will be impossible with God.”

Everything we believe about and about what God does goes back to this. In theological language we say God is omnipotent, “all powerful.” Our normal assumption about this would be: God wills it, and it is done. God becomes pictured as some kind of infinite despot. Imposing his sovereign and inscrutable will on everything. But that is not how we see it in the Bible. That is not how God relates to human beings. God does not unmake what he has made. And part of what he has made is human freedom. God achieves what God set out to do. God achieves the impossible, like virgins conceiving children. But he doesn’t do these things at the cost of denying human freedom. God does not impose his will. If he did, in this scene, God’s action would amount to rape. That it doesn’t places this scene in a very sharp contrast to the mythic stories told by the Greeks and Romans about their gods! God’s omnipotence consists of infinite patience. Which reveals the more important characteristic of God than power: Mercy! God’s mercy requires patience. God must allow space for a human “no” to his request. Slightly facetiously we might speculate about how many women Gabriel had to visit first before he found one, Mary, willing to say yes to what God is asking. It is allowing humans the space to say “no” which leads ultimately to the cross. Though because “nothing will be impossible with God” even that leads back to God’s patience and mercy.

God’s initiative always waits for a human response. Perhaps we need to picture the scene between Mary and Gabriel differently. It is not Gabriel who stands and Mary who kneels at his feet but the other way round. Gabriel comes to her and honours her. He pays her high compliments, so high that they startle Mary:

“Favoured one, the Lord is with you. . . you have found favour with God.”

Gabriel comes to woo Mary for God. It is almost as if it is he who kneels at her feet with flowers and chocolate. Which points us to the real nature of the Gospel. The gospel is a love song sung by God to the human race. God’s initiative is still waiting for human response.